The Significance ( and Importance ) of Being Human

With an air of indignation
Smiles a painted porcelain face
And we're supposed to trust this
Decorum has its place
But you and I beyond that
With a question I might ask
How suddenly the smile doth crack
When we slip beneath the mask.-Blues Traveler

Human beings are fallible, or put simply, able to fail! There's no doubt there, as long as we are human, failure will always be an option. Try as we will, we may, and often will, succeed more often than we fail, but be sure that at some point, we ARE going to fail; it's a fact of life!

I try to look at failure as Edison did; 'I’ve tried everything. I have not failed. I have just found 10,000 ways that won’t work'. The best we can do is try; sometimes we succeed right away, sometimes it's not till we have failed many, many times! When we persevere, however, we have succeeded, whether it's in figuring out that it can't be done, or just in finding 10,000 ways it won't work ( 'try, try again' )!

There are those out there who will try to tell you, 'if you just believe', you can do anything you want! We've yet to see any of them 'add one cubit to his stature' or sprout wings and fly! Yet, with the progression of technology, we have, almost literally, seen men 'sprout' wings and fly! Wilbur and Orville Wright, much as Edison, I'm sure, found many, many ways that it wouldn't work before they finally figure out one that would! Their experimentation led to the first man-made flight ( unless you count Greek myth ) and, 'O, how far we have come since then!' 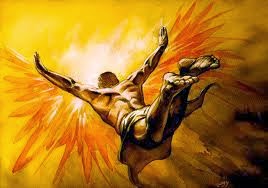 Humans are able to fail, yes, but they are also able to succeed! The successes & failures of man ( human beings ) have become the stuff of legend! Over the millenia, especially in the past several hundred years, many have now gone where 'no man has gone before'; we have made many great leaps as a race! Much of this is due in great part to huge leaps in technology, but as much is due simply to the perseverance of man in his fallibility! Though these men & women knew that their efforts were subject to failure, they also knew that if they tried enough times, and persevered, that their dreams could come true!

Another area in which mankind has made amazing progress over the past thousand years, is in their understanding of God's Creation, or the field of Science. From a literal reading of certain passages of Scripture, up until the time of Galileo & Copernicus, the prevailing notion was that the sun revolved around the earth.  One can only imagine how many times both of these men tried ( and failed ) to officially disprove that notion, before they finally succeeded! This view, known as geocentrism, is around today, though not nearly as popularly accepted!

Man; fallible but perserverant as he is, can only recreate, being made in the Image of his Creator. Solomon, the wisest king of Israel, once made a statement that is far-reaching and eternally true; 'there is nothing new under the sun': he, with the Wisdom from Above, knew that man, in all his creativity, could only add on to what was already there, to do what had been done before.

We, with the blessing of our Creator, have been able to make great progress in our evolution, but even though we have made such leaps in the fields of Technology & Science, it boggles the mind to think about how much further we have to go; the possibilities seem to be endless! Some even hold out the possibility or probability that we will become gods ourselves!

Looking at all the ways in which mankind has failed ( in so many ways ) since that time reveals in a greater light the manifold ways in which they have succeeded! In every example of their failure, we can see how, through that failure, even greater Success & Glory came about! Conversely, looking at the great leaps that mankind has made, we can as easily look back and lament the manifold failures that have led to this glorious progress!

Immanuel, God With Us

When God divested Himself of His Glory and came to dwell with us as the Son of Man, He did so to cement a relationship with His Creation! Although known to His people, the knowledge of the Creator of Heaven & Earth had not spread very far beyond the cradle of civilization. With the Advent of this Knowledge, Science & Technology began to grow by leaps & bounds!

Though man often denies this Knowledge and attributes His success to himself ( as a god ), as we saw earlier, man can only re-create; we can only take what already exists and use it for our purpose; we can not make something entirely new to do something that has never been done before!

Life itself & the ability to breathe in & out ( 'fearfully and wonderfully made' ), to recreate in our own image, is a Gift from God, and one which is made possible by the fact that this IS His world, His Creation, and that He dwells with us! If not for the Knowledge of God being spread throughout the earth, neither science nor technology would have seen the progress they have, in fact, it is barely arguable whether they would have seen any progress at all!

Human beings are fallible, yes; they will never be anything but! However, our Creator & Father is infallible; He cannot and never will fail; whatever He has ever set out to do has come to pass ( Isaiah 55:11 ); we are not like that: we can only strive to do again what He has already done, with the knowledge & ability that He has severally given to us, to varying degrees of success; this is part of Being Human!

As we strive, in our fallible humanity, to reflect this Image of God on a world that desperately needs a Father, let us persevere through our failures, knowing that our failures bring success! Let us recreate as we were created, and continue to spread the Love &; Knowledge of our Creator & Father 'as the waters cover the sea'!