'O My Goddess!' : The Divine Feminine 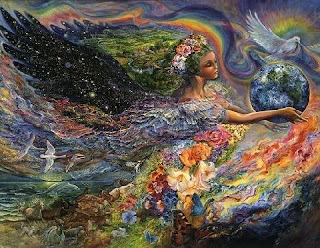 
Now in the sixth month the angel Gabriel was sent by God to a city of Galilee named Nazareth, to a virgin betrothed to a man whose name was Joseph, of the house of David.
The virgin’s name was Mary. And having come in, the angel said to her,
“Rejoice, highly favored one, the Lord is with you; blessed are you among women!”[c]
Luke 1:26-29

According to the words of the Psalmist in Psalm 127:3, 'children [ are ] a heritage from the Lord,
the fruit of the womb [ is ] a reward'. While this is abundantly clear, the glaring fact of the matter is that, without women, there would be no children! For that matter, the same could be said of men, as well, but this blogpost is about 'the divine feminine', not 'the divine masculine'. As important as are the roles of both in the formation of children in the womb, the Mother bears the greater glory, perhaps, for though without the Seed there would be no conception & thus no birth, the woman alone has a Womb to carry the Child, which is essential in its formation.

Before we progress any further, we should clarify that this biology only serves to house humanity! This is not to say, as some have accused, that, as the Gnostics said, 'the body is a prison for the soul'., for though we know that the Divine Spark, which is present in each one of the Creator's 'children', is our true nature, this biology serves as the Creator's Hands & Feet, so to speak. When children, male or female, are born into this world, therefore, it should be clear that those physical bodies are only the manifestation of the Spirit Within.

The most famous & glorified Mother, Scripturally speaking, which is accepted by most, if not all Christians, is Mary the Mother of Jesus. As the Story goes ( read the first chapters of Matthew & Luke here ), Mary conceived as a virgin, without being intimate with a man. The Holy Spirit came upon the Virgin Mary, as the Story goes & She conceived within Her Womb the Christ-Child. Having written on this subject before, we will go no further here than to say that it is entirely possible for a Spirit being to impregnate a human female. That being said; Mary is henceforth venerated for Her role in bringing to bear Jesus, whom we acknowledge was the God-man, the Word made flesh.

Since ancient times & even in some cultures today, Goddesses are worshiped in their various roles
( anything from the Goddess of Fertility to the Goddess of War ): every ancient culture, even Western ( Pagan ) ones, had their varied Gods & Goddesses. These Deities, while based in fact, were simply different aspects of what these cultures perceived. We may liken it to the story of four blind ( East ) Indians describing an elephant. Each felt a different part of the animal, so thus, each one had a different perception of what an elephant is. This Story resonates with ours, for though our perceptions may differ, yet there is One Creator God & it is Him ( or Her ) that we worship with our bodies.

It was said by Jesus Himself, quoting the Psalmist ( Psalm 82:6 ), 'You [ are ] gods,[b] and all of you [ are ] children of the Most High': this has been a matter of some contention, with most Christians simply saying things like, 'well, we may be gods, but we are not Gods ( like the capitol letter is reserved for the Creator God alone ), but for some reason, the Hebrew word transliterated ''elohiym' is used in both cases, for mere men & for the Creator God.  In context, these men that the Psalmist declared 'gods' were the judges of Israel, but are we not all judges? Do we not all judge for ourselves, whether we lean upon some book or not, what is right & what is wrong? As Jesus said next, in response to the Pharisees' charge, 'If He called them gods, to whom the word of God came (and the Scripture cannot be broken), do you say of Him whom the Father sanctified and sent into the world, ‘You are blaspheming,’ because I said, ‘I am the Son of God’?' ( John 10:35 & 36 ) In much the same way, we, as Spirit beings, of One Essence with the Creator God, are sent into this world to inhabit this biology, to be His Hands & Feet!

The Gnostics, whatever may be said for or against them, were not all right, but neither were they all wrong! That we are Spirit Beings, of One Essence with the Spirit who is the Creator God, they had right, but that those Spirits, or that Spirit, maybe more correctly, is trapped, against its will, in this biology does not resonate very well with what we know, or at least, think we know. One aspect of Gnosticism that resonates well is the old maxim, 'know thyself'. It is in knowing ourselves that we are able to evolve, or adapt to pretty much any given situation!

The many different aspects of the Creator God were well-observed by the ancient Pagans, though they were attributed, for the most part, to individual Gods & Goddesses. In the Ancient Near East, as well as in the Far East, the case was pretty much the same, with tribal gods ruling the day. The Creator God, according to the History of Israel, which we read in our modern Bibles, was revealed to His Creation through the unfolding of said history, yet there are Stories told & written more ancient then Israel. All these Stories, though they differ in the telling because of the various cultures, yet venerate the women, usually one woman in particular, as the Goddess who brought the Savior into the world of men!

The Sacred Womb, though not the only necessity in child-bearing, is perhaps the most basic. Not being a scientist by any means, I cannot say with any real authority what all transpires in a woman's body as she bears the child for those 9 months, but safe to say that with the Womb, or the Divine Feminine, the Seed would not get very far!

Children surely are a blessing from the Lord of Heaven! It is through them our name is perpetuated; they carry on the work that we've begun, much as we ourselves carry on the work that Jesus the Christ began. Through the same Spirit that enabled Him, along with the Divine Feminine, these mortal bodies are enabled to greater works than He did!