But there shall by no means enter it anything that defiles,
or causes[o] an abomination or a lie,
but only those who are written in the Lamb’s Book of Life.
Revelation 21:27

Utopia is a beautiful dream, but is it any more than that? John is describing one of the many facets of the New Jerusalem above, or, as some might term it, 'heaven'. If 'Heaven' is indeed a place where the 'wolf' will literally lay down with the 'lamb', and the 'lion' will literally feed alongside the 'ox', then maybe we are waiting, futuristically, for some far-off utopian landscape as John seemingly describes above. 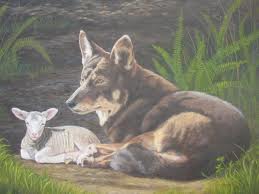 Any simple Google search using terms like 'lion with lamb' ( which is based on a faulty tradition ) or even 'wolf with lamb' will likely reveal at least one story or video about unusually friendly animals cavorting together that are traditionally at enmity with each other, or at least are thought to be. Is this simply a preview of 'Heaven', a foretaste of what things will be like when Jesus finally comes back, burns up the earth ( including its periodic table ) with unquenchable fire, and ushers in 'the new heavens, and new earth'? Or is this merely the result of the peace that the Presence of God brings? Is this simply one of the many facets of the concord that we so fondly refer to as 'Heaven'? 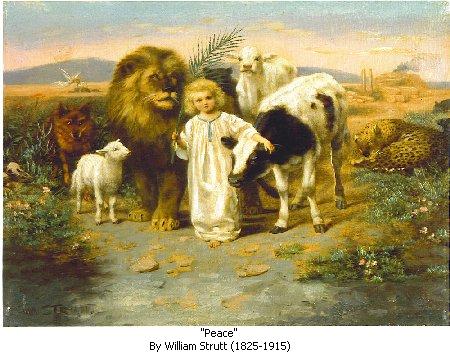 To imagine a world without physical, mental, or emotional disability, especially for those like myself, is a pipe-dream; as the saying goes, 'wouldn't it be lovely?' Yes, that would be lovely; no more being carried like a back-pack around 'the Kitchen Sink', no more having to refrain from certain activities because my body just won't keep up with my mind, no more carrying a cane everywhere I go, and etc., but that's just me!

It has been said, and said often and truly, that the Book of the Revelation borrows more heavily on Old Testament history than any other book in the New Testament. This is not as clear as it should be to the casual observer, especially those who tend to disregard the Old Testament, except maybe the Psalms and Proverbs. When read in the context of the Hebrew Scriptures though, and even part of the Greek, it is easy to ascertain the truth of this statement. For instance, by reading the prophecies of Ezekiel and Hosea, we can easily ascertain to 'whom' John is referring when he mentions 'the great harlot'. When we read of the 'beast' of Revelation, especially the many-faceted one in Revelation 13, all we need to do is read the prophecy of Daniel ( and even Ezekiel ) to see where John got his 'picturesque' story from. There is truly, 'nothing new under the sun'!

In the first few verses of Revelation 21, John seems to describe a utopian Paradise, an almost unearthly ( although hauntingly familiar ) dream-scape, but when in the context of like passages above, we can see that this is speaking of a present situation, though maybe future to the original audience.

In the modern evangelical church, this lie, among others, has been propagated out of mostly pure ignorance, though in many cases, it is purposeful ignorance, for whatever reason. Even though these lies, especially in the case of 'Heaven', may convey beautiful pictures to our naturally speculative minds, they are what they are, and not being defensible, in all honesty, from Scripture! As lies, especially in the case of 'Heaven' ( and related doctrines ), they may seem harmless enough, but they really are not!

Pretty obviously, at least, in the more traditional version, if 'Heaven' is a place that is often termed 'Utopia', or even 'Paradise', then futurism is right, and we have it to look forward to upon physical death ( depending on which version you ascribe to ), or at the return of Christ, which Scripture says has already happened! If one lives according to their belief that Heaven is a place that we only look forward to, then that one will naturally focus one's efforts on going there when one dies, instead of building God's Kingdom on Earth, as He instructed His disciples to do in the first century AD! Remember too, that Jesus told those same disciples, in the first century, that His Kingdom ( 'Heaven'? ) was near! If we do not understand this aspect of the Story, we will miss many other statements that Jesus made, and the many allusions to the Hebrew Scriptures that He, as well as the apostles, made!

Beauty, as Truth, is absolute! Either something is beautiful, or it's not! In some relative sense, 'beauty is in the eye of the beholder', yes; one man might see beauty in a certain woman or thing while another may not. The beauty cannot be seen though, if it is not there! If one man sees it and the other does not, the other is necessarily deluded; the thing he beholds is beautiful, but he has been blinded to it's beauty! So it is with Truth; if a lie is taught long enough, and seems to be beautiful enough, it will be believed as truth! Beautiful as it may seem, though, 'Heaven', at least as we have traditionally been taught it, is a lie!

What is truly beautiful, though, is that God has made His people ( on Earth ) His New Temple, or dwelling place, and that is Heaven! It is the enduring Presence of God which is truly and absolutely beautiful, and this is what Scripture actually teaches!

Let us rest in this Truth, while doing our best to build up in His Kingdom of Beauty!

You're welcome, Paul, and thank you for your encouraging comments!:)

Charles, very good read and i get what you are sayiv but then what are we to make of the afterlife?

Why make anything of the 'after-life'?

that's the point, people are focusing so much on the after-life that they forge to live now, in God's Presence!